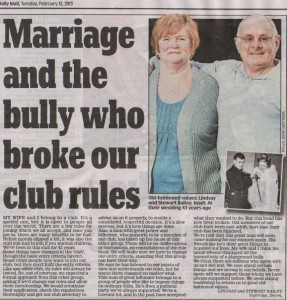 See the scan from the Daily Mail (12th February 2013) which is a letter penned by Lindsay and Stewart Bailey who, in a very convoluted way, basically are saying they are upset about the new ruling on Gay marriages. They refer to this by saying things like “My wife and I belong to a club, it’s a special one”. Let’s get this straight – Marriage is not a fucking ‘club’ as they put it, I was more of the opinion it was the showing of a commitment between 2 life partners, or in a religious term ‘a holy union witnessed by God almighty’? Any of these seem like acceptable terms, but not a fucking club!

What kind of morons are you both? You moan about these unsavoury people being admitted to your ‘club’ and that the big bad bully politicians  fast tracked the legislation without consulting you – what did you expect them to do? Hold a fucking referendum with every married couple in the UK, Europe….the world? Please explain to me exactly how Homosexuals  being allowed to marry is going to affect your life at all? Or your marriage come to that. I am waiting for an explanation! You both sound like a pair of bigoted, homophobic morons who are hell bent on seeing that anyone else who does not fit your Nazi criteria for marriage to be cast aside, burning in ‘Bailey Hell’ – like you have to be part of some Aryan master race to even be considered entry to your ‘club’.

I quote “…Old members of our club have been cast adrift, hurt that their club has been hijacked…” – How do you KNOW this? Have you spoken to all the other married couples? Or is this just a shit hypothesis that you dreamt up while knocking back a pint at the working men’s club on a Thursday evening?

Believe it or not, Mr & Mrs Bailey, Homosexuals (clinical term I know) are…..people. Real people. They didn’t land with ET and forget to get the last bus home. Why should they not be allowed the same happiness that everyone else experiences? It’s not like you will have to take them out on (or fund) their stag do/hen party. You won’t even have to give them away. WHAT IS THE FUCKING PROBLEM? Again, if you ever get to read this, you bumbling  geriatrics, please explain (in plain English) how this ruling is going to affect you. I can sum it up right here: It won’t. So….SHUT THE FUCK UP!

Anyone needed a good laugh, read that letter, it is complete bollocks from start to finish.

One thought on “Geriatrics with ‘opinions’”

Most things piss me off. They probably piss you off too. Don't like what you are reading in the posts? Either:

a) Leave a comment, so I can laugh at you.
b) Go somewhere else.
c) Work yourself into a personal rage, much like I do.